I’ve loved to do many things and writing has always been more than a desire…but a need. Lately, I’ve been able to fill that need and now I can’t get enough. I’m not the best writer – but I have some good ideas and a willingness to improve on my writing.  Thanks for stopping by.


Logan began his college studies in Business as does a large number of students unsure exactly what to study.  After a few years enjoying writing business plans and even starting his own business, he wanted something more challenging.  Subsequently, he changed to Biology and began to study pre-med classes – moving in the direction of the medical field.  Logan worked as a Certified Nursing Assistant in several nursing homes.

He moved to Colorado to continue school and upon graduation was accepted to A.T Still University in Arizona into the Physician Assistant Master’s Program.  He graduated from PA school with a Masters in 2007.  He moved to Utah during the last few months of school as part of his rotations.  He was hired by the Utah State Prison as a Physician Assistant and has worked full-time since the end of 2007.  His job is one of the most challenging that he has ever had. He receives very little appreciation for his work but his own personal satisfaction is immeasurable.

Logan started a medical website called InterActive Health and blog to allow himself a chance to write and keep current on medical topics.  He believes that often patients know only the bare minimum about their own health care and Logan has a desire to increase the interaction with patients and their medical care. Logan continues to work on that website weekly.

The writing bug continued to fester and Logan came up with an idea that he wanted to turn into a book.  He had been thinking about pieces of the book for the last few years.  Finally over a year ago, the book pieces fell into a more manageable place.  The insight and connections were amazing.  It fit together so well that Logan felt that he had no other choice than to begin working on the book.   It is the name for this blog. 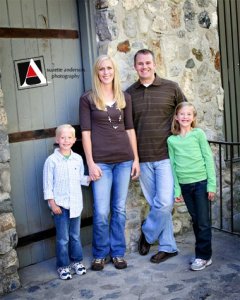 Logan has been married for 9 years now.  It has been amazingly fun and entertaining.  Some days can be difficult but Lauren has been a great support for Logan in the many adventures they have been together.

Logan has two children:  Kayla and Landon, who are both adorable and amazing.  They feed of each other which can be both a blessing and a curse.

Logan loves to travel and plans on returning to France and Switzerland as often as possible.  Plus a few new places would be just as amazing.

He grew up in Littleton, Colorado and went to High School in Castle Rock at Douglas County High School.  Logan loves the diversity of life and the many possibilities that it offers.    Logan played Football and Baseball during high school and tried acting and singing is a few school performances.

Logan has a love of Christ and has searched to find him, it has been an interesting adventure.  Logan joined the Church of Jesus Christ of Latter Day Saints when he was 18.  A year later he served a mission in Switzerland, Geneva.  A large portion of his time was spent serving in France.  Logan tried to learn French in high school but failed miserably.  He did however have the opportunity to travel to Paris, France in High School and loved every moment of it.  Logan however, did not fully learn french until his mission.  It took some really difficult months but he finally learned to communicate.

Logan returned from his mission and moved to Orem, Utah for college at Utah Valley State College.  Logan moved along with his best friend Paul [who had already been living there for 6 months].  Logan began writing on his own and working on business plans with his friends.  Logan along with three friends won a business competition.  It was exciting!  Logan then decided to try his own hand at a computer business.  It worked well for over a year, until forced to move locations and Logan had difficulty from that point on.   This was a life altering moment, one of many.

Before heading down the path of medicine Logan worked hard in being an entrepreneur.  Working with several friends and colleagues to explore the possibilities of this sector.  It was fun and exciting.  Together they took 1st place in the Utah Entrepreneur Challenge with a business concept called CityNet.   This competition was done throughout the state of Utah with several participating universities.  Overall they received $10,000 seed money to launch their business. They were also given the Wayne Brown Institute Award and the Award of Excellence from the Mountain West Venture Group.  As a result they awarded us the best business plan of the year and helped us win a consulting package worth over $20,000.

Logan continued for a time with CityNet as an owner and part of the marketing team.  He left to pursue another business adventure called FlyFlicker.  This experience had nothing to do with fishing, though that would have been fun as well. FlyFlicker was a computer wholesale company that worked closely with many other top companies to provide computer supplies.

Things always seem to sneak up on Logan, a new adventure, a new story or another great idea.  Thanks for joining him on his quest.  Please feel free to comment wherever you want!!